The Hugo Awards are one of the main events at a Worldcon.  They have been given out annually since 1955, and are one of the primary purposes of the World Science Fiction Society (WSFS).  Retro-Hugos may be awarded on the 50th/75th/100th anniversary if none were originally given that year.  There were no Retro-Hugos in Helsinki. 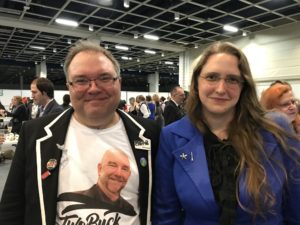 This year, our friend Chuck Serface (aka “Two Buck Chuck”), was one of the finalists for Journey Planet, a fanzine he co-edited along with 6 other friends, including Christopher J. Garcia.  Chuck asked Stephen to be his designated acceptor, should they win.  This meant that we were invited to the Pre-Hugo reception.  We had an opportunity to talk with folks we knew, and folks we had just met.  We had a nice chat with Ada Palmer, who subsequently won the Campbell Award.  I was also talking to folks about Worldcon 76 next year, since I’m running the Program.

We ended up seated in front of Amal El-Mohtar (who won for her short story, see the post here), and Michi Trota and Julia Rios (who won along with co-editors Lynne M. Thomas and Michael Damian Thomas for Uncanny Magazine).  It was loud behind us.  But great fun.

We were also invited to the post-ceremony Loser’s Party.  Winners may attend, but will be mocked and made to wear silly hats.  Worldcon 76 co-hosted with George RR Martin at a local place Steam Hellsinki.  Great decorations, great food & drinks, great company.  Unfortunately, I had an early day with the Masquerade on Saturday, so we didn’t stay that late.