Worldcon 75 – a trip to Helsinki, part 4 – The Masquerade

Here we are, the big event for me, the Worldcon Masquerade.  I’ve been working towards this since before we got into town.

A Worldcon Masquerade is a major stage event, just like a play or musical.  Except that we have one day to rehearse everything, make sure that the lights and audio are set, that everyone knows how to work on the stage, that the crew have all of their cues, for our one big night. 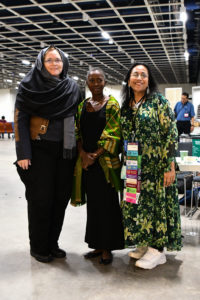 After my initial concerns about a small entry list, we ended up with 25 entries, most of whom were novices under the International Costumers Guild (ICG) rules.  My Co-Director, Debi Chowdhury, convinced nearly everyone she saw wearing a costume to enter.  We set the run order on Friday afternoon, trying to get a balanced mix of experienced and new, dramatic and humorous, etc.  One of our two Young Fan entries withdrew, and the remaining Young Fan decided she wanted to participate as a Novice.  Good choice, as you’ll see later.

The day starts with a 10am meeting for all of the participants.  We go over the schedule for the day, walk through the stage and back stage areas, discuss missing audio files and other specific issues, and then break to start the tech rehearsal at 11am.  Except that the tech crew didn’t think they needed to be there until noon.  We hung around until we got someone who knew how to run the lights and audio board, but once we started, we moved along fairly quickly.

My biggest problem was differences in expectations.  Many anime conventions expect a full skit/presentation — more like a variety show with song/dance/etc.  A Worldcon Masquerade expects a 60 second or so presentation.  The only person with a microphone is the Toastmistress.  So folks need to record their script or provide it to the Toastmistress.  I ended up as Karen Lord’s surrogate as she was scheduled for several panels during the day.  Using my best stage voice, I introduced folks, read (and edited) scripts, made sure that everyone had some sort of audio to play in the background if they didn’t already have something, and helped them figure out their staging.  My absolutely invaluable helper was Lori Meltzer, who is an experienced Masquerade stage hand.  She coached participants on movement and attitude on stage and explained how we would help cue them during the actual event.

We planned to open the auditorium at 7pm, and start just after 7:30pm.  I got the Press Room to print out the revised script at about 6:30pm.  And then realized that I hadn’t print out the intro for Karen Lord.  Husband to the rescue — I e-mailed the file to the Press Room and got Stephen to pick it up for me.  And then when he walked in to give it to me, I grabbed him to become the “Voice of God” — the person behind the curtain who does opening announcements — because all of the Finns felt they had too much accent. 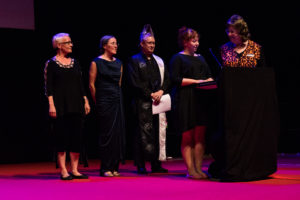 Our judges included a mix of US, British and Finnish costumers.  Both workmanship and presentation judges complained that they had too many good costumes and costumers to pick from.  But in the end, they were able to make their awards.  Best in Show Workmanship went to Leena Peippo as Dwalin the Dwarf.  And Best in Show Presentation went to Olivia Flockhart (the Young Fan who switched to Novice) as When Halley Came to Jackson in 1910 (Halley’s Comet).

We handed out a total of 20 awards.  The full list along with links to lots more photos is here on the Worldcon 75 website.