After the Masquerade, I was ready to sleep in!  But we weren’t quite done yet.

We had a Masquerade Show & Tell scheduled for 2pm.  The contestants all came and wore or brought their costumes from the night before.  Several spoke about how they had made this or that piece.  At least 2 had props that they were not taking back to the US, and offered them to the Finns.

The winner of the Best Recreation costume, Kerttu Vähänen, was also awarded a membership to Worldcon 76, for her Doctor Strange costume.  The Cloak of Levitation was totally hand-sewn, with 5 different fabrics.  And she absolutely nailed the attitude both on stage and in the convention halls.

After that, we were off to Closing Ceremonies.  Jukka noted that final registration was 10,516 Members (full week and day passes), and 7119 people on-site.  This made us the second largest Worldcon ever (after Sasquan for 11,742 total members and Loncon 3 for 6,946 attending members).  See the Long List for more details and history about Worldcons.

Kevin was handed the gavel as Jukka transferred things to Worldcon 76.  We showed a short video about San Jose, done to a filk version of Do You Know The Way To San Jose, which had the crowd chuckling with the puns.  It will eventually be available to the public, but not yet. 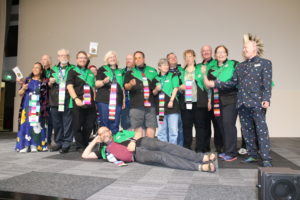 And then we had a chance to rest before repacking for our next stop: Stockholm.