Remember that advertisement about Worldcon?  Our expectations had been for a convention of 3500-4000.  In the last week, though, memberships surged.  The crowds on Wednesday were so bad that many members couldn’t get in to see the panels and presentations.  The hallways were full of folks trying to get to the events.

It got to the point where the convention Chairs made the decision to close membership and limit the number of day passes.  See the post here.  It generated a lot of discussion on-line, but generally folks were positive about the way it was handled.  The worst of the crowds died down around the Info Desk and Registration Desk, but the panel and presentation rooms were still packed.  The Ops staff ended up posting a sign on each door once the room was filled, so that folks wouldn’t keep trying to get in.

Our Outreach/Press Relations Area Head was actually a local news agency reporter, so had pre-existing connections into all of the Helsinki area outlets.  Here’s a permalink to her writeup in the JOF list on Facebook.  My suspicion is that her excellent PR skills lead to the tremendous local interest and the surge of attendees. 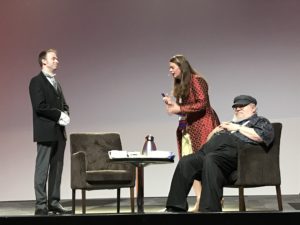 As I was busy with Masquerade prep, and in the midst of the crowding, I only got to see one event on Wednesday, but it was absolutely fabulous.  Tea and Jeopardy (Emma Newman and her husband Peter) did a live podcast recording with author George R.R. Martin.  Guests on the podcast get “a nice cup of tea, a cheeky bit of cake, and a spot of mild peril” as they visit the tea lair.  In this instance, after a delightful chat, GRRM drank the potion guaranteed to produce nightmares and the audience had to do their best death howls to wake him up.  Both Emma and Peter have pieces in the new Wild Cards book (which he is still editing).  And Emma avoided mentioning Game of Thrones completely.

As Debi Chowdhury and I were manning the Masquerade Sign-Up table, we kept seeing folks in some great costumes.  Debi was working the crowd and convinced many of them that they should enter the Masquerade.  My concerns about a small and short event became less and less as Wednesday became Thursday. 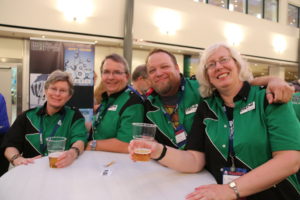 Worldcon 76 had a fan table and a display in the Exhibits hall.  We had several new pop-up banners, which we ordered from a printer in Estonia.  They did a great job and cost us about half what the same thing would have cost if printed in the US and shipped to Helsinki.  Kevin Roche, the Worldcon 76 chair, gave a great presentation at The Fannish Inquisition on Thursday afternoon.  He announced our two additional Guests of Honor, John Picacio (artist) and Frank Hayes (musician).  The Worldcon 76 crew also sponsored a party, along with several other potential future Worldcon sites, on Thursday evening.  We received pass-through funds from MidAmeriCon II and celebrated Andy’s birthday with cake.  And people started to see the green shirts we were all wearing during the week.