Finally got the WP site accessible

After spending lots of time reworking the site, I stalled at the point of getting the main domain name pointing to the new pages.  The WP Codex was not that helpful, as it does not show what the final .htaccess and index.php files are supposed to look like.

After lots of searching, and a few failed attempts (including messing up access to the login files), I succeeded!  So you’re able to see this!

Short version:  you need to have a copy of the hidden file .htaccess and the visible file index.php in BOTH the top-level directory (public_html or www) and in the WordPress subdirectory (wp, etc).  The contents of each file vary in a small but critical manner.

And then it kept pointing the Blog link to the old site!  WordPress is generally easy to use, but when you have to dive under the hood, the instructions leave a bit to be desired.

With California’s drought continuing through its 4th year now, we are all being asked to conserve water and cut our usage by 20-30% from a couple of years ago. One of the biggest areas of usage for most folks is landscape irrigation (i.e., sprinklers).
When we did the landscape revision in 2008, we weren’t really thinking about this and everything put in was a spray head. There was some duplication in areas, although not a lot. And, of course, we now have mature plants, which don’t need as much water. So we’ve combined 5 spray circuits into 2 drip circuits. It’s been interesting learning about the tools and options out there.

We have a mixture of Rainbird’s 1800 heads and Unispray heads.  The Unisprays are mostly in areas where we wanted a really short throw (2′ or so). I didn’t want to have to dig up all of these sprinkler heads, so was happy to learn that Rainbird makes caps for the 1800 heads (part# 1800CAPOFF), although they are often hard to find.  Most stores geared towards retail customers won’t even know that they exist.  Unfortunately, they don’t make caps for the Unispray heads.  Nor do they make “blank” nozzles that don’t actually deliver water when under pressure.  Rainbird also makes some nice drip conversion pieces and sets, with “Easy Fit” connections.  More on this below.

My limiting factor was which sprinkler heads I could cap off.  I started with just reducing the number on one circuit by capping half.  Then I went to a circuit where we only had a couple of plants left (and no plans to replace the others), just to reduce the volume used when watering.  And then I thought it would make more sense to convert to drip.  Our local Orchard Supply Hardware store had the Rainbird conversion kit (RCKIT1PK), and we had some leftover parts from when we first bought the house, so I figured it would be easy.  It mostly was.   I converted one circuit along the fence, with the star jasmine and some other shrubs.  The biggest problem was finding the 1800 heads, buried now under leaves and ground cover that had blown up to the fence line.  I capped all of those heads, except the one that I put the conversion on.  It worked well.  And then I realized that it would be easier to extend that line to cover the entire fence and I wouldn’t have to worry about how to cap off the Unisprays – I could just turn off that entire circuit.  I did the same thing around the side and back of the house, which converted three spray circuits into one drip circuit.

Now to figure out what to do with the “back 40” area, which is three more circuits.  Some of the plants there are looking pretty over-grown, so we may replant to something a bit more drought-tolerant and switch to drip at the same time.

These include straight, elbow and T connectors, as well as 1/2″ and 3/4″ adapters (male and female, designed to screw on to the kit or onto the end of a pipe), and a Flush Cap adapter.

You can easily slide your 1/2″ hose onto the connectors.  The nice thing here is that you are basically wedging the hose between two layers, so the increased pressure when there is water in the pipe actually helps to keep the connection tight and leak-proof.  But you can also take it all back apart as you wish.

However, the adapters “click” into place and cannot be easily removed.  This does not seem to be what they had intended (especially given the flush cap adapter).  Perhaps there is a separate sort of tool that is needed to be able to separate the parts, but if so, it’s not something they have information about on their website.  Basically, you need something that will slip down between the adapter and the connector wall that will push apart the two pieces so you can pull them apart.

The kit is relatively easy to find, which includes the replacement body (which you don’t have to use), the filter, a T connector and the 1/2″ female adapter (MDCF50FPT).  The rest of the pieces are available through Rainbird, some on-line retailers, and some commercial landscape supply stores.

One of our friends wondered if I would be willing to put on “some makeup” for a costume set… green makeup, to play Elphaba (the Wicked Witch of the West) for an Oz-based group for the Masquerade at Westercon 64 in San Jose, July 2011. I said sure!

Debbie already had her “Oz-girl” costume from a previous event, as did Mia. Kathe had her Glinda costume as well. We needed to add Elphaba, The Wizard, Dorothy and Prince Fiero, for our version of The Dating Game.

The musical Wicked used a lot of asymmetry in the costumes.  So I went to my Professor McGonnigall costume to see if it would work.  I thought that the black top was a bit too plain for this, so made the same top in a stretch lace and just put a black t-shirt under it.  This, of course, meant that not only did I need makeup on my face, but also on my hands and forearms.  I asked folks about brands of makeup that worked well.   I opted for the Ben Nye in part because it was easy to get, and used the CL-3 Green with some CL-2 Forest Green for contours/low-lights.  I also found a green eyeliner and a green glitter nail polish.

The hat needed a bit of work, as the brim in the show has a defined shape.  I added bias tape to the edge after finally attaching the millinery wire to the edge of the brim.  And then realized that since I was wearing a wig, the hat wouldn’t stay on without a pair of really big hat pins. 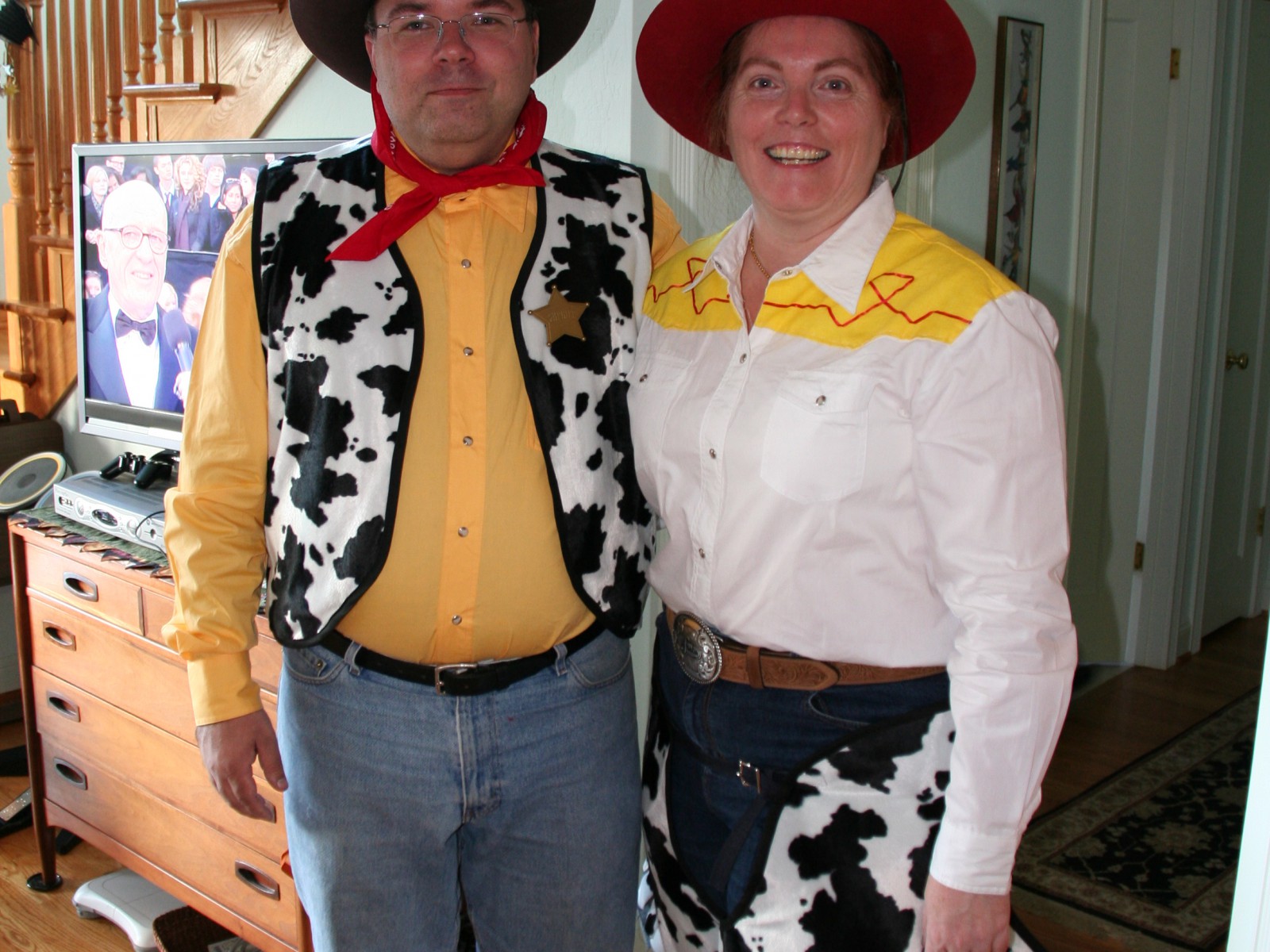 2011 was an unusual year for the Oscars party.

My mother-in-law had been ill and wasn’t allowed to travel to altitude.  So we got to host the party.  We thought that doing characters from Toy Story 3 would be fun and easy, and most importantly for us as hosts, comfortable to run around in.

I found the cow-print fabric on-line.  It has a bit of a nap like a real hide might, although it’s washable.  I used the Tandy Leather chaps pattern, and lined them with denim.  The typical last minute costume work was actually cutting the fringe while the caterers were setting up.  I cut up an old shirt of Stephen’s to make the vest pattern.

I used some yellow fabric to create the contrasting yoke which I just sewed on top of the shirt, and then some red ribbon to make the pattern.  I never did make cuffs.  Both shirts were purchased from a western-wear e-store.

Even more important than the cow-print fabric was the red hat for Jessie.  Once I found that, at a local western store, I knew the costume set was a go.

We also had Mr & Mrs Potatohead as guests at the party. We were all bummed that Toy Story 3 didn’t win anything.

Well, I decided that it was time to do a major revamp on the website.  I haven’t really changed it in about 10 years!

And there are things that I’d like to write about.  Mostly how-tos and reviews of different things.  And a bit about costuming.  And…

Anyways, I hope you find it enjoyable.  Or useful.  Or something.